Standards are at the cornerstone to build a resilient European Single Market enabling companies to demonstrate compliance with EU regulations, creating a level playing field for businesses and increasing consumer confidence. Transferring R&I results to a standards-setting organisation further extends exploitation by spurring innovation. This ensures the uptake and wider use of new technologies and inventions, guaranteeing interoperability and compatibility, providing quality and safety levels, and codifying knowledge in clear and specific ways.

For these reasons, HSbooster.eu, a 24-month EU-funded project aims to precisely contribute to standards development. The project was presented to an online audience of 140 participants coming from research & academia, Government & public services, Industry, and SDOs on Tuesday 31st May 2022.

The webinar was opened by the introductory speech of Ioannis Sagias, European Commission Deputy HoU for valorisation policies and IPR,  who highlighted the importance of valorising Research and Innovation efforts. He pointed out how the European Commission has been working to understand the best valorisation channels and tools to boost the transformation of knowledge into sustainable and concrete solutions. The Commission Proposal for a Pact for Research and Innovation (R&I) in Europe adopted in July 2021 indeed identified value creation as one of the key principles of EU R&I and highlighted knowledge valorisation among the priority areas for joint action by the Member States. Following this Pact, the EU Standardisation Strategy contains two specific activities to work on the still unexploited potential of prenormative work, which are the Code of Practice for researchers and the Standardisation Booster.

The event then continued featuring the whole project Consortium and was moderated by Nicholas Ferguson, Senior Project Manager at COMMpla and Trust-IT and HSbooster.eu Coordinator.

Nicholas explained that HSbooster.eu has the main ambitious objective to provide professional consultancy services to guide and support beneficiaries and consortia of Horizon 2020 and Horizon Europe R&I projects to make sure they take the right strategic approach and contribute efficiently to the Standardisation process in line with the recently issued European Standardisation Strategy. The project pursues its main goal via four more specific objectives, namely (1) creating a community of standardisation experts who will share their knowledge, (2) designing the services that the experts will deliver to research projects (3) pushing new standards development and (4) encouraging the uptake of new technologies

The floor then passed to Signe Annette Bøgh, Project Manager at Dansk Standard,  who explained how R&I projects can valorise their results and have higher impact thanks to HSbooster.eu, whose services could be consumed by applying to 5 periodic open calls. Each call will focus on a set of priority topics connected to the standardisation urgencies,namely (1) health and pandemics, (2) resilience and robust supply chains, (3) sustainable digitalisation and data quality & AI, (4) EU Green Transition and clean energy, (5) smart cities and circular economy.

The first call for projects will open on 21st June. Once the application is submitted an eligibility check will be performed and eligible projects will be matched with an expert in their field on a “first-come-first-served” basis.

You can already express your interest for the open calls here.

Ivana Mijatovic, Full Professor at University of Belgrade, then focused on the importance of providing adequate training to develop expertise in the field of standardisation which, as she explained, is different from competence (typically thought in academia). Expertise is dynamic, domain-specific and made of three key components: knowledge, experience and problem solving. The HSbooster.eu Training academy will be made of 6 training packages in 3 levels (beginner, intermediate and advanced) which users can select  based on their desired learning outcomes.

Ray Walshe, Professor at Dublin City University introduced the Expert Advisory Group of the project who is in charge of prioritising open call topics and suggest new topic areas, as well as encouraging standardisation experts’ applications which can be submitted here.

He also highlighted the benefits of the project for SDOs, ESOs and NSBs, given by the engagement with R&I projects and the support towards meeting EU strategic objectives.

The last panelist was José Lucio Gonzàlez, SGS CyberLab Madrid Manager, who highlighted the importance of standards for business and market uptake.

The event ended with  the concluding remarks by the moderator Nicholas Ferguson who acknowledged the very engaged participation of the audience, who actively committed and asked questions both during each panelist’s presentation and in a dedicated final session. The participation was positive also on social media with live tweeting performed via the official project channel @HSboosterEU.

Did you miss this webinar? Watch it here and stay tuned for the upcoming events! 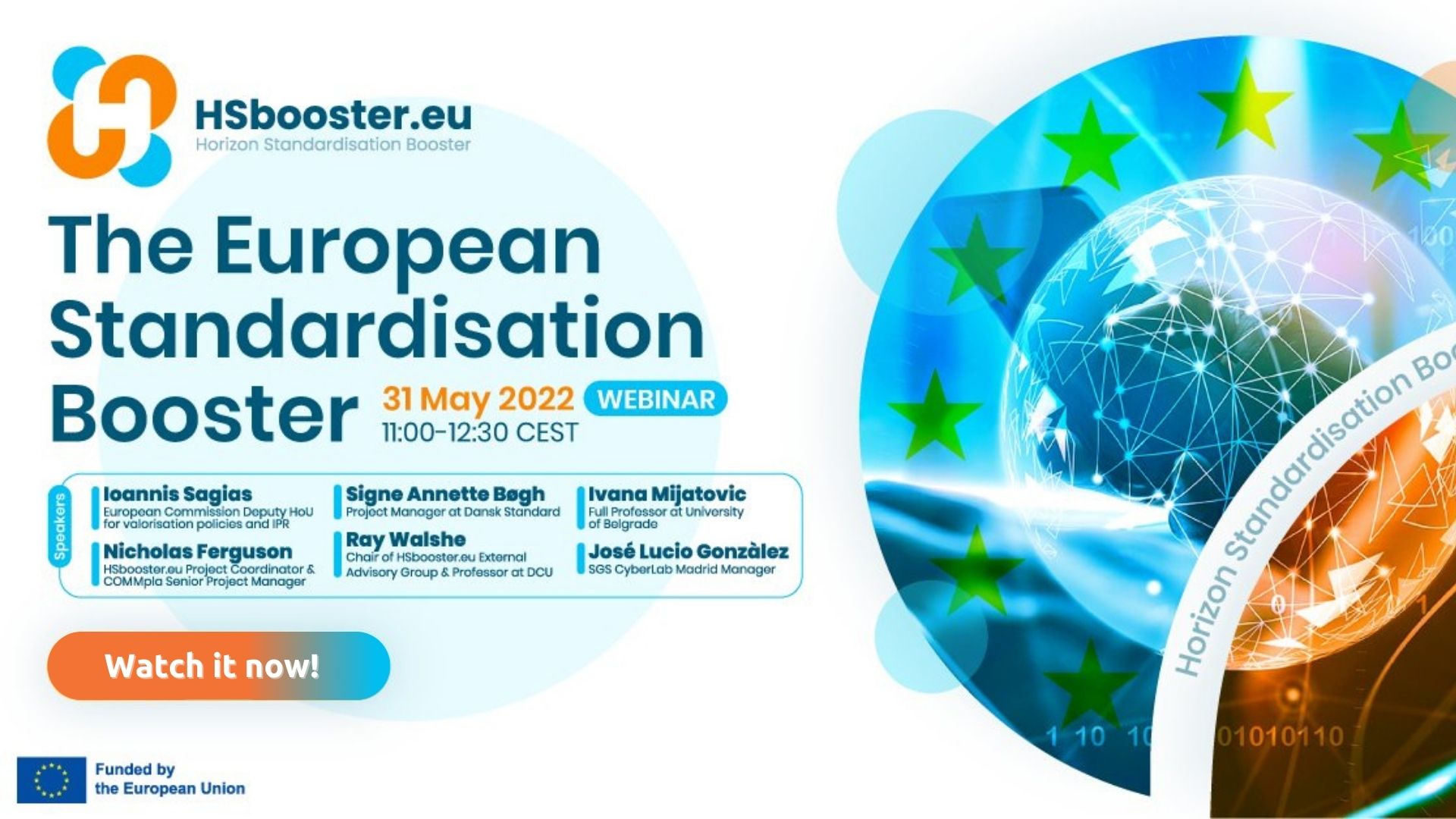